Mark MK will be in Flushing NY on Oct 7th at Cheap Shots. Come by for a free installment of the Concert Bites Series. 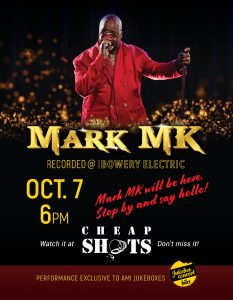 Mark MK, a native New Yorker, is an R&B star who has opened for John Legend, Flo Rida (with the help of DJ Kronik), and performed at BB King’s with Rahsaan Patterson.

“I was so excited to perform at Bowery Electric and showcase several of my songs, specifically my new one titled, Tequila Tequila which is available exclusively on Concert Bites Jukeboxes/AMI Entertainment.”

Organized through Emerson Amusements, which represents AMOA and Club Lucky in New York City to helps restaurants and bars/pubs engage customers by providing their establishments with a wide range of services.  Its coin-operated amusements include jukeboxes, arcade games. ATMs, photo booths, and table games (i.e. pool, ice hockey) to bring excitement, entertainment. and engagement to client bars, restaurants, and pubs.

Now, Emerson Amusements takes the lead with a new and creative initiative called the AMI Jukebox Concert Bites Series, where they capture, edit, and present mini-concerts events via jukeboxes connected to multiple screens at various clubs and restaurants. They’ve launched the series in New York City and Long Island, but aim to expand it across the United States. Stay tuned!

If you own a venue we can help ramp up the fun. Contact us today for more information.