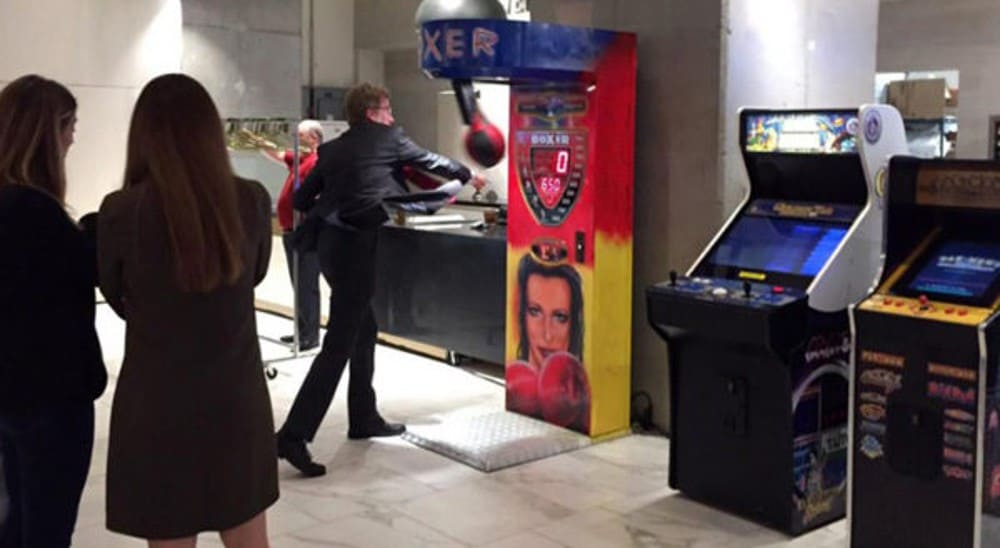 Every champion was once a contender that refused to give up!”
– Rocky

What Is a Boxer Arcade Game?

Boxing arcade games are becoming increasingly popular, as they offer a fun and challenging way to work out. Players use their fists and feet to punch and kick the punching bag (it looks more like a speed bag or soccer ball, to test their strength and accuracy.

These games are a great way to focus, relieve stress, burn calories, and improve your coordination. So if you’re customers are looking for a fun and challenging workout, the Boxer arcade game might be what you need! 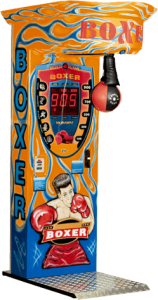 A score of 1-999 based on the strike, generated the score for players to complete with themself, or their friends.

This game also includes more than 140 taunting voice messages which will reel the player back in again to try for a higher score and be the champion among their friends.

The history of boxing arcade games can be traced back to the early 1970s. One of the earliest examples is a game called Heavyweight Champ, which was released in 1976. This game was followed by a number of other boxing games over the years!

Do you have the speed, force, and focus to top the leaderboard scorers

What Does Boxer Arcade Game Cost to Rent?

It is risk-free! That’s right, Emerson Amusements will install Boxer in your bar, restaurant, arcade, and/or another venue, without any money requirement on your part. Emerson Amusement will install it, maintain the maintenance and servicing of the games, and you simply provide the space and share in the profits.

Emerson Amusements takes the risk, and you share in any profits Watch this video for more info …

How Does the Boxer Arcade Game Work?

The Boxer arcade game is a popular choice for many arcade enthusiasts. But how do they work?

The data from these sensors is used to determine the strength and accuracy of the player’s punches, as well as their speed and stamina. This information is then used to calculate the score for each player.

In addition to tracking the players’ movements, the Boxer arcade game also uses audio cues to create an immersive experience. The sound of each punch landing, as well as the crowd noise, add to the realism of the game/.

How Do You Beat the Boxer Arcade Game?

In the sport of boxing, speed and accuracy are key. When it comes to training, nothing tests these qualities quite like a boxer punch machine. These machines can be found in many gyms, arcades, even bars, pubs, and restaurants, and they are a great way to improve your striking skills. But how do you beat the boxer punch machine? Here are a few tips:

The popularity of boxing games in arcades began to decline in the late 1990s, however, they have seen something of a resurgence in recent years. With such a wide variety of options, you can place one machine, or build your own mini-arcade. Whether customers challenge themselves, or others, it’s great fun. As an operating member of Club Lucky, we even organize leagues and tournaments to help promote your venue. Some of the more popular leagues and tournaments are for Skee Ball, Golden Tee, and Big Buck Hunter.

Where Can I Rent the Boxer Arcade Game?

Emerson Amusements has been a supplier of arcade games since 11937, serving restaurants, bars, and pubs, but also amuse,ent parks and game arcades,.

These bar game machines come in a wide variety of styles and colors, like attractive metallic finish, eye-catching airbrush, and basic colors.