Video games in general, and bar-top video games and arcade games in particular.  have come a long way since their humble beginnings. What once was a simple pastime has now become a global phenomenon. One of the most popular places to play video games is at the bar. Bar-top video games are a great way to pass the time or compete with friends.

The History of Bar-Top Video Games

In the 1970s, Atari introduced the first video game, which was a hit in bars and taverns across America. The game was simple: two players used joysticks to control their on-screen paddles and tried to bounce a ball past each other into their opponent’s goal, emulating the basic concept of tennis. The game was so popular that it spawned a whole genre of video games, including classics like Ms. Pac-Man and Donkey Kong.

Today, bar-top video games are more popular than ever. Arcade games too have become immensely popular and even spawned tournaments for games like  Golden Tee Golf and Big Buck Hunter. These games are now found in bars and pubs all over the world, providing hours of entertainment for patrons.

Video games have come a long way since their humble beginnings as pixelated diversions. Today, arcade-style games are a staple at many bars, and thanks to advances in technology, there are compact video games that can easily fit on a bar top. These bar-top video games are more immersive than ever.

So how do these bar-top video games work? Most of them are based on the same principle: players use a controller to interact with on-screen elements in order to score points. The controllers themselves vary depending on the game; some use a traditional joystick and buttons setup, while others may incorporate a trackball or other type of input device.

The games themselves also vary widely in terms of graphics and gameplay. Some bar-top video games are simple, 8-bit style affairs, while others feature cutting-edge 3D graphics and sound.

In a world where people are constantly on the go, video games provide a much-needed outlet for relaxation. Bar top video games are becoming increasingly popular as they offer players a chance to socialize while enjoying their play. Here are just a few of the benefits of playing bar-top video games:

There are a plethora of bar-top video games to choose from these days. How does one narrow it down to the best? Here are a few factors to consider: graphics, gameplay, replay value, and price.

When it comes to graphics, few bar-top video games can compare to “Pac-Man”. The colorful pixels and classic 8-bit graphics are still as captivating today as they were when the game was first released in 1980.

Gameplay is also an important factor to consider. Games like “Donkey Kong” and “Frogger” are easy to pick up and play, but hard to master. They’re perfect for quick sessions at the bar. Replay value is another consideration. Games like “Ms. Pac-Man” and “Galaga” offer hours of entertainment with their challenging gameplay and multiple game modes.

To order bar-top video games for your bar 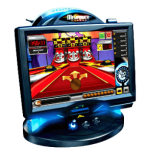 Merit’s Megatouch Aurora marks a revolutionary advancement for bar game machines. The elegant, rounded design invites players with a dynamic multi-color light show that extends the game beyond the screen. Packed with tons of addictive games, this unit is sure to be popular with your patrons. 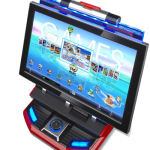 Encore is an all-in-one bar game machine that delivers HD games and millions of songs. Sleek styling and advanced technology combine to bring you a countertop experience that is unrivaled. The optional JVL Media Stream lets your patrons also select music to play. Enjoying music and bar video games has never been this awesome! 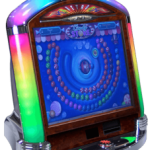 The Retro, is not just a machine, but an experience! Classically inspired by the elegance of yesteryear, the Retro is a balance of craftsmanship combining the beautiful elements of wood, chrome, and lights. No corners were cut to echo the great bar game designers of the past. Harmonized halo lighting brings a new dimension to gameplay; the symphony of lights dances to your touch. This bar game machine must be seen to be believed! 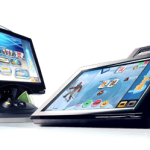 Megatouch Rx redefines the mood in your venue with the new, remarkably versatile machine. It has addictive new games and a sleek, low-profile enclosure which makes it versatile for placement in any venue – indoors or outdoors. This bar game machine knows no boundaries!

The above are examples only, inquire about our full selection

To order bar-top video games for your bar